We are part of Blackheath.
Project Glenella.
A landmark in Blackheath for over 100 years, Glenella and the families who have operated and lived here are currently being researched by the Blue Mountains History Society.

Glenella Guesthouse is more than just an accommodation venue, it represents some of the best Blue Mountains Guesthouse history around. This is recognised and Glenella is listed as a special place on the NSW heritage listings building database (ref.Bh095).

The original part of Glenella was built in 1904 by George Phillips, a carpenter by trade. George was a South Australian born of Welsh parents. The Philips family first moved to the Blue Mountains on account of the delicate health of one of his eight children. Over time, he purchased three allotments which accounts for the spectacular land and gardens that now surround Glenella. The building was expanded in 1915 to become the much larger Guesthouse present today, but has altered and flexed over the years.

To describe Glenella, the register includes this..
“Glenella displays some of the characteristics of the Federation Queen Ann Style and has features such as:

Glenella Guesthouse has been an important focus of tourist activity in Blackheath since 1915.

After the extensions in 1915, the Guesthouse was managed by Elizabeth Phillips and her five daughters. A two story section downstairs was later added in 1917 to accommodate up to 60 guests as the tourism trade flourished in the Blue Mountains. Glenella was built, owned and run as a guesthouse for many years by the Phillips family. After the deaths of George and Elizabeth, both in their eighties, the guesthouse was run by their daughter Leila and then by one of their daughter-in-laws, Laurel.

In 1973 Glenella was passed out of the possession of the Phillips family when it was sold to Michael and Monique Manners, where, during the early part of the 1980’s the Glenella Restaurant of the 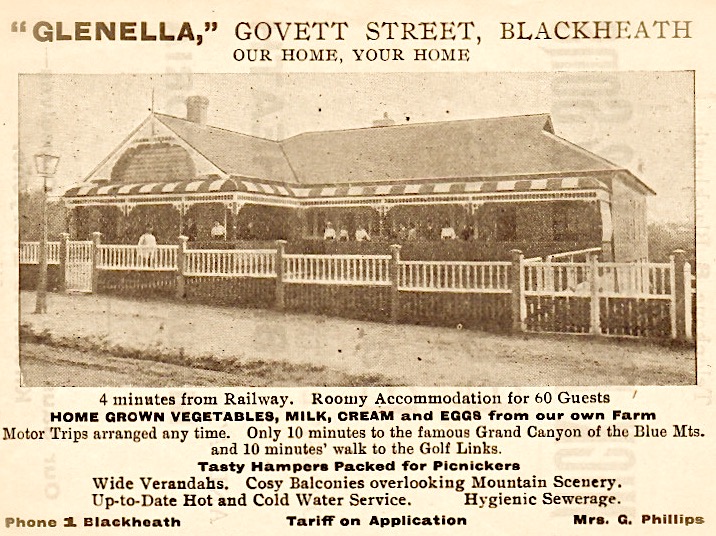